Located in the historic Gissenfeld Klosters forest of southeast Zealand, the 900-meter elevated boardwalk gradually leads people from ground level through the treetops and culminates in a 45-meter tall tower offering a panoramic view of the surrounding landscape.

Gissenfeld Klosters Forest is a preserved site one hour south of Copenhagen. As glacial woodland with rolling hills, ephemeral streams, lakes, wetlands and meadows, the forest contains several natural biotopes, a variety of animal species and a rich birdlife. A challenge of the project was to create an exciting and easily accessible walk through the forest, without disrupting its natural environment. To minimize the project’s impact on its surroundings, the boardwalk is lifted above the natural ground as it zigzags between the existing trees and adjusts to the existing conditions and habitats of the forest. The result is a new, seamless way to move through the forest, lifted above the ground while experiencing the scenic nature.

The forest boardwalk is split into a higher and a lower walkway: while the higher walkway takes one through the oldest parts of the forest, the lower walkway and observation tower are located in the younger areas. The high walkway features a series of experiences in which one passes through a volière with different birds, rests on a stepped seating pocket, and approaches the trees to study their features up close. The route passes a diversity of Danish tree species while leaving them untouched, and makes the forest experience accessible to everyone without steps or obstacles.

As the final destination of the forest boardwalk, a 650-meter long inner spiraling ramp lifts one up above the treetops to experience a 360-degree view of the area. From the top platform, one experiences a panoramic view 140 meters above sea level, the highest accessible point in Zealand. On a clear day one can see 50 km out to Copenhagen and Malmö in the north, and towards the rugged southern Zealand manor landscape to the south and east.

The seamless, continuous ramp slowly increases in height with a fixed gradient, and the geometry and spacing of the ramp fluctuate according to the changing curvature. While walking up to the summit, the transparency of the tower makes it possible to experience what happens on many levels of the tower at once, making the ascent as much of an experience as the rooftop itself.

The hyperbolic shape is both a strong characterizing feature for the project and serves a practical function, as it leaves more space for the top deck and base while increasing the overall stability of the tower.

Since the tower is placed in a forest clearing, it becomes a clearly defined geometric element in the forest while still managing to adjust to its context by curving away from the surrounding trees, so its slender waist leaves more space for the tree crowns. In the center of the tower three existing trees also reach up towards the sky, with their crowns spreading out as the inner tower diameter increases. Thus the tower shape stands strongly out from the forest, yet still relates strongly to its grown elements.

To minimize the impact on the landscape, the project is mainly constructed in two materials: weathering steel and locally sourced oak. The materials are sustainable in that the COR-TEN steel is maintenance-free, and the untreated oak is sourced from the forest itself and can, therefore, be composted in nature. Visually, the rugged, rusty and brown materials blend into the surrounding nature when walking along the forest path, on the cylindrical ramp and as viewed from the top deck.

The long steel beams strongly draw the curved contours of the tower from the outside; the experience when walking along the ramp on the inside is more delicate, with slender wooden boards of the walking path and the continuous rhythm of the metal handrail leading one towards the top.

With its hyperbolic shape, the tower stands out as a sculptural element and a landmark in Gissenfeld Klosters Forest that will attract tourism and interest to the area. But aside from its strong geometry, the project still manages to adapt to and blend into its surroundings with its natural low-maintenance materials and carefully placed zig-zagging route that lets one experience the forest in a new, sensitive way.

The treetop boardwalk and observation tower will both be part of Camp Adventure, an existing adventure sports facility that includes treetop climbing and aerial zip lines. The project was awarded the 2017 ICONIC Award in the Visionary Architecture category. 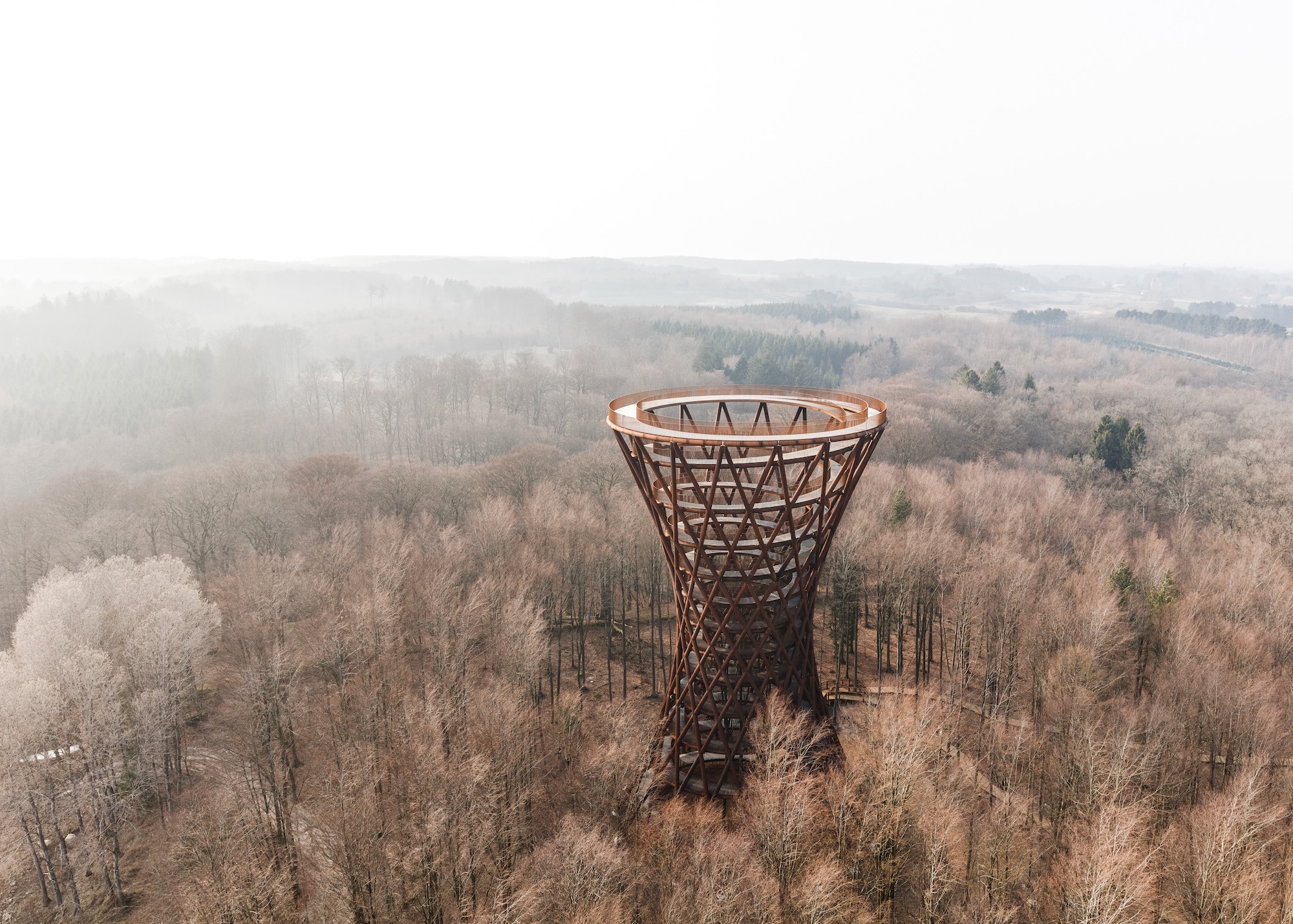 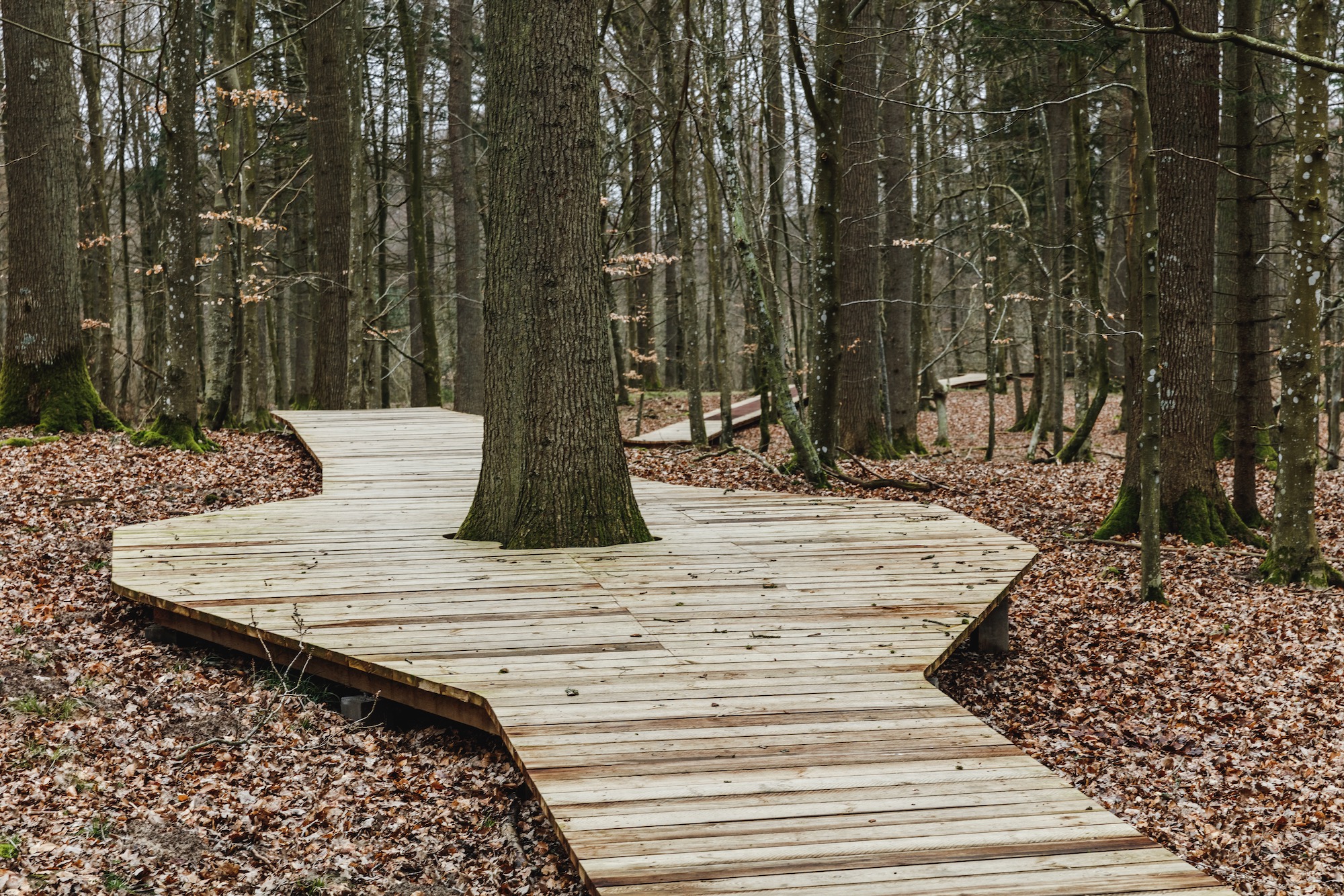 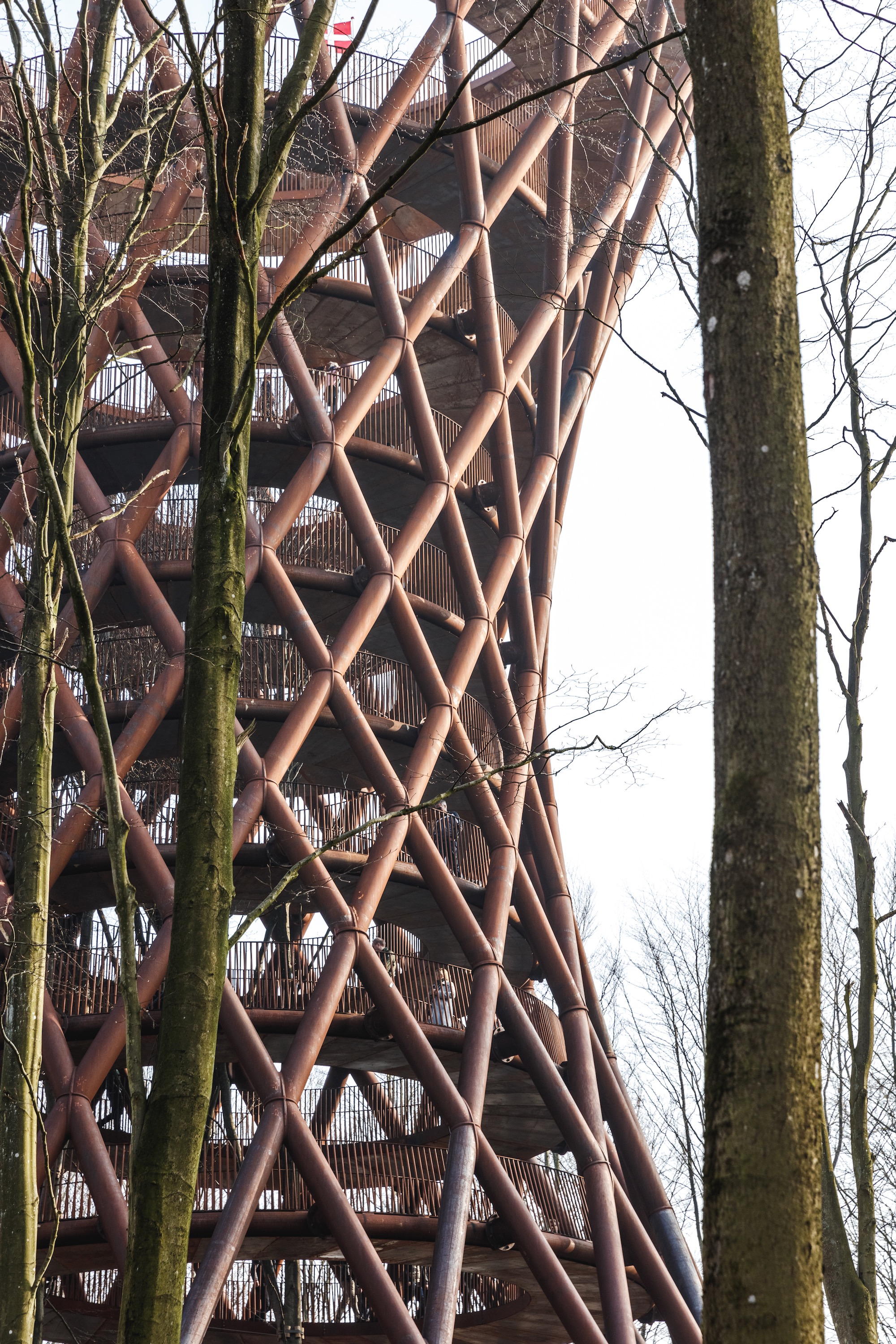 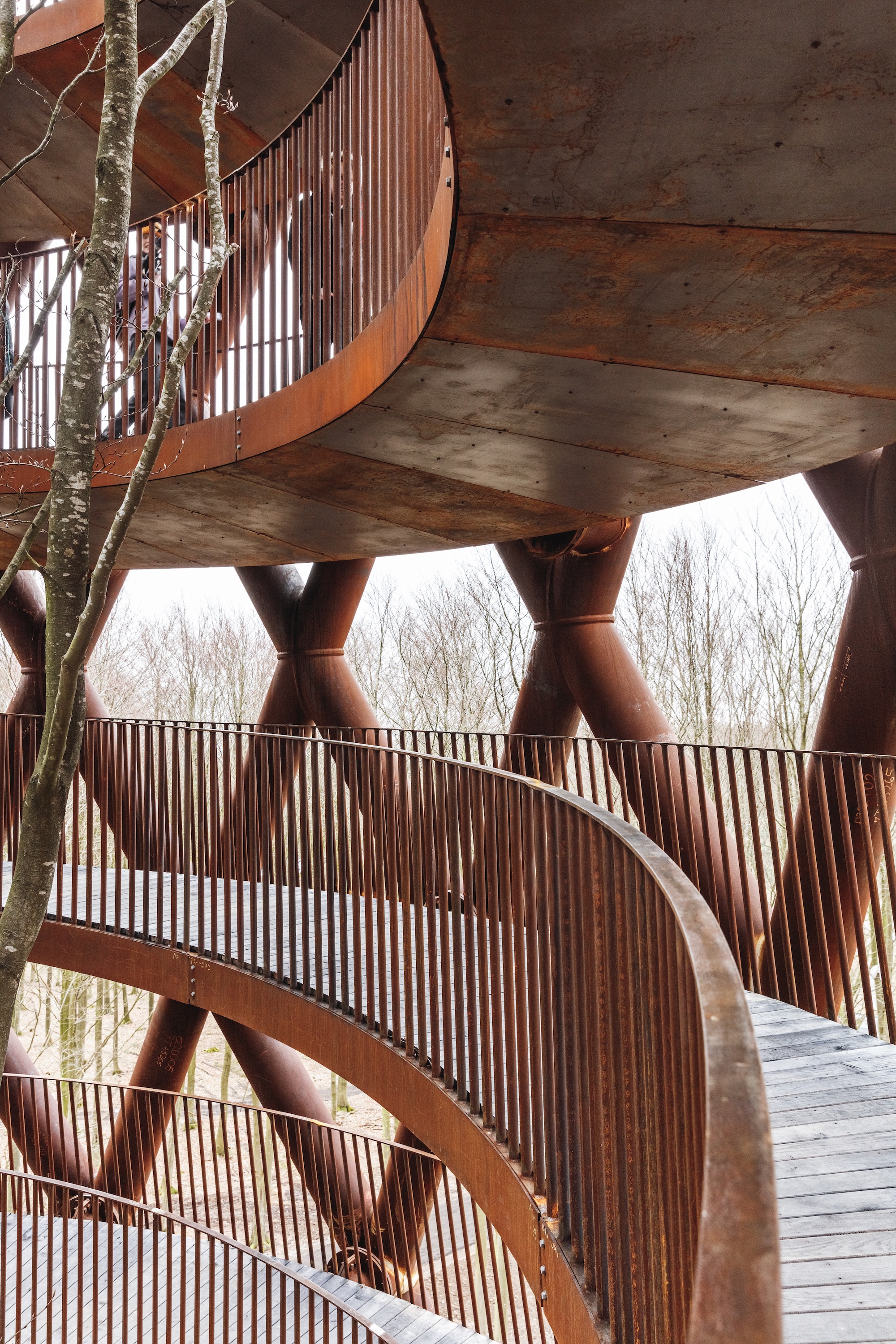 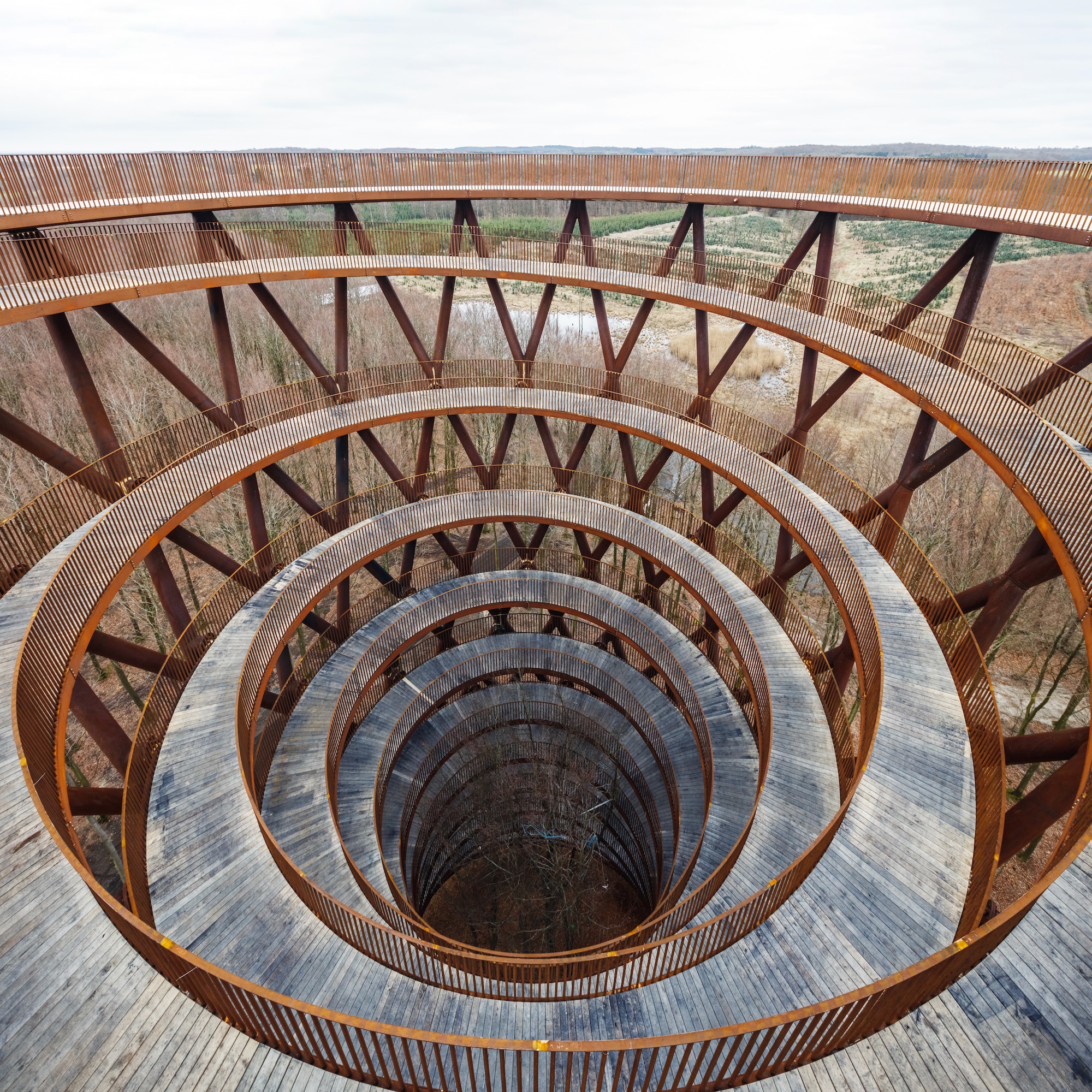 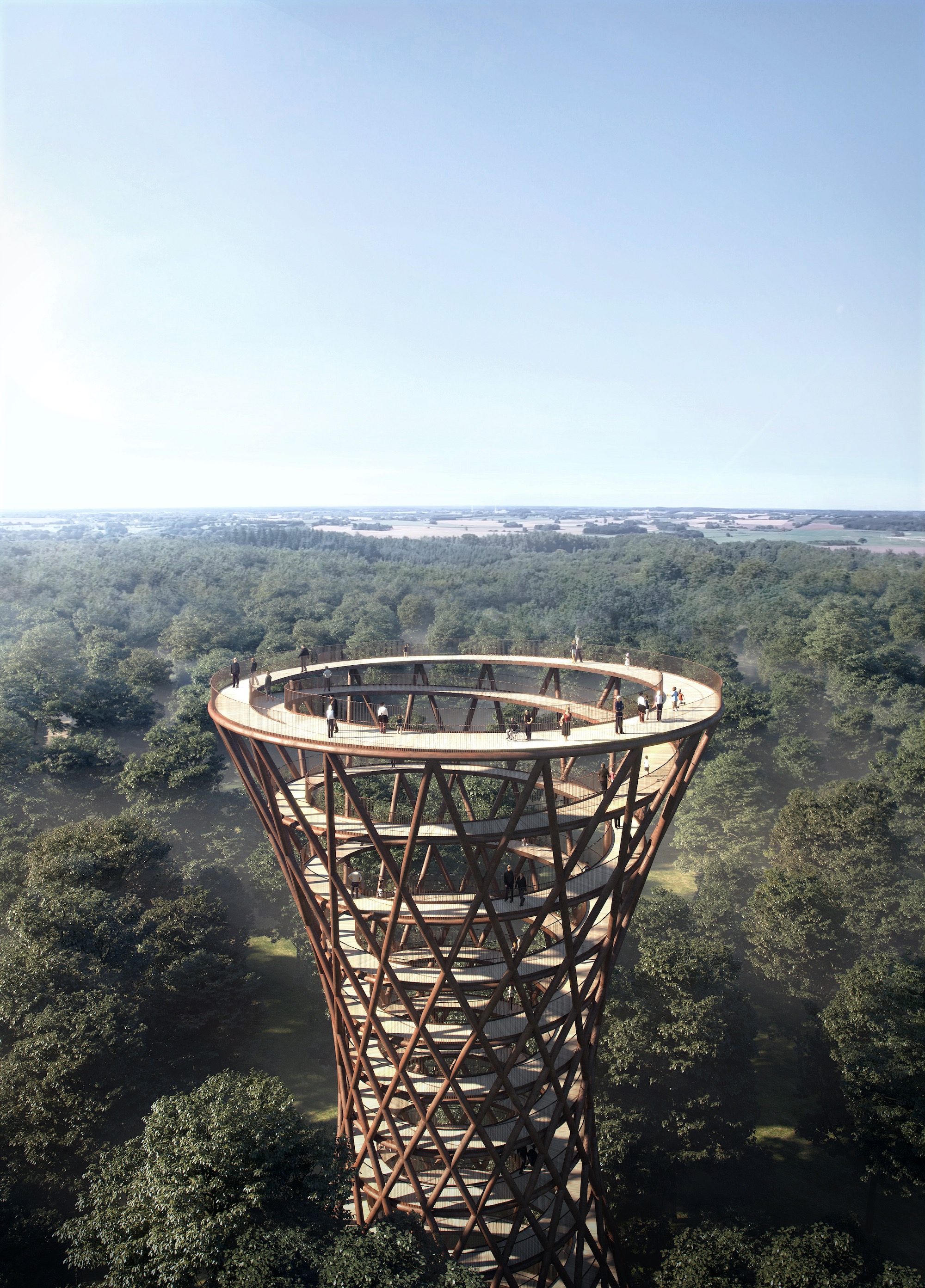 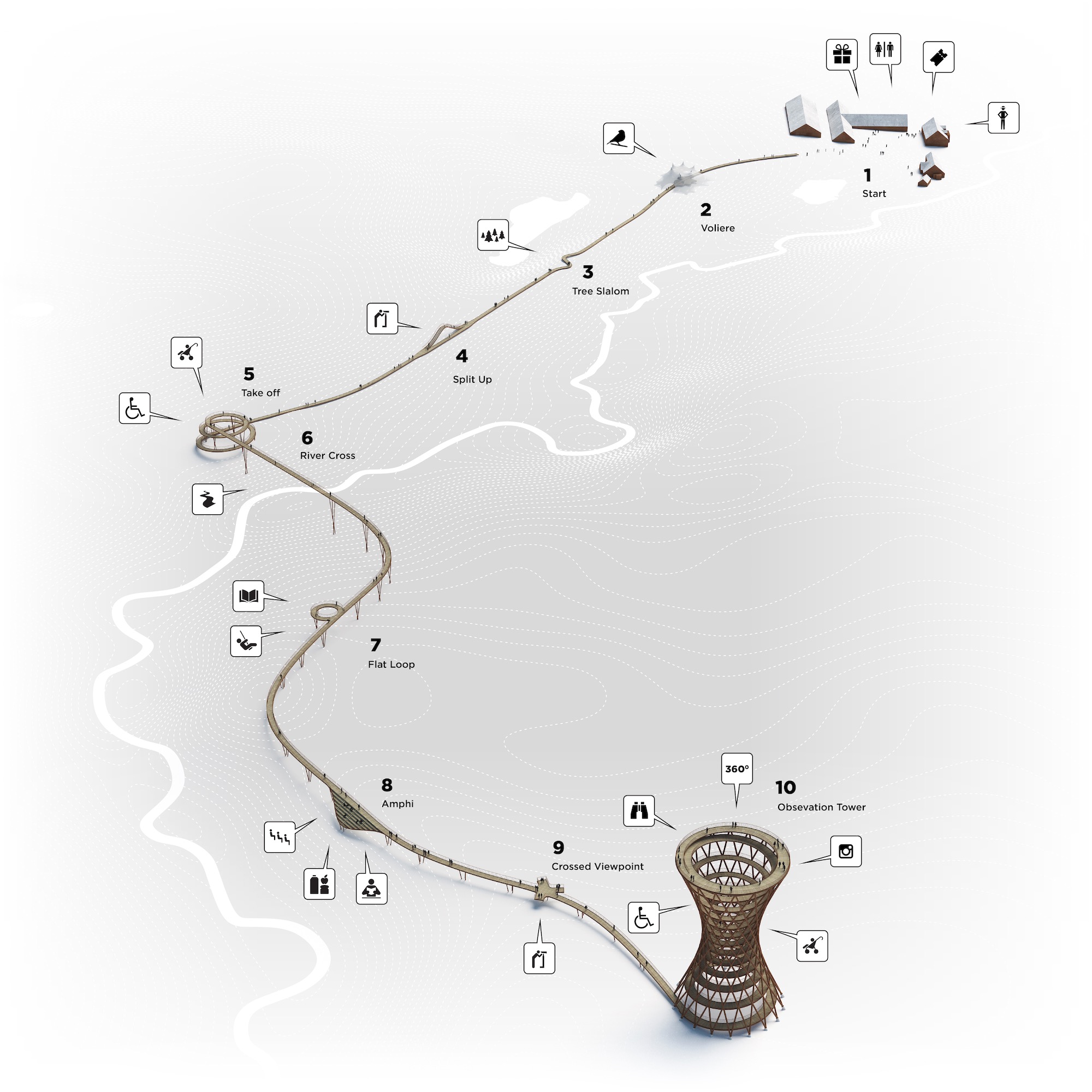 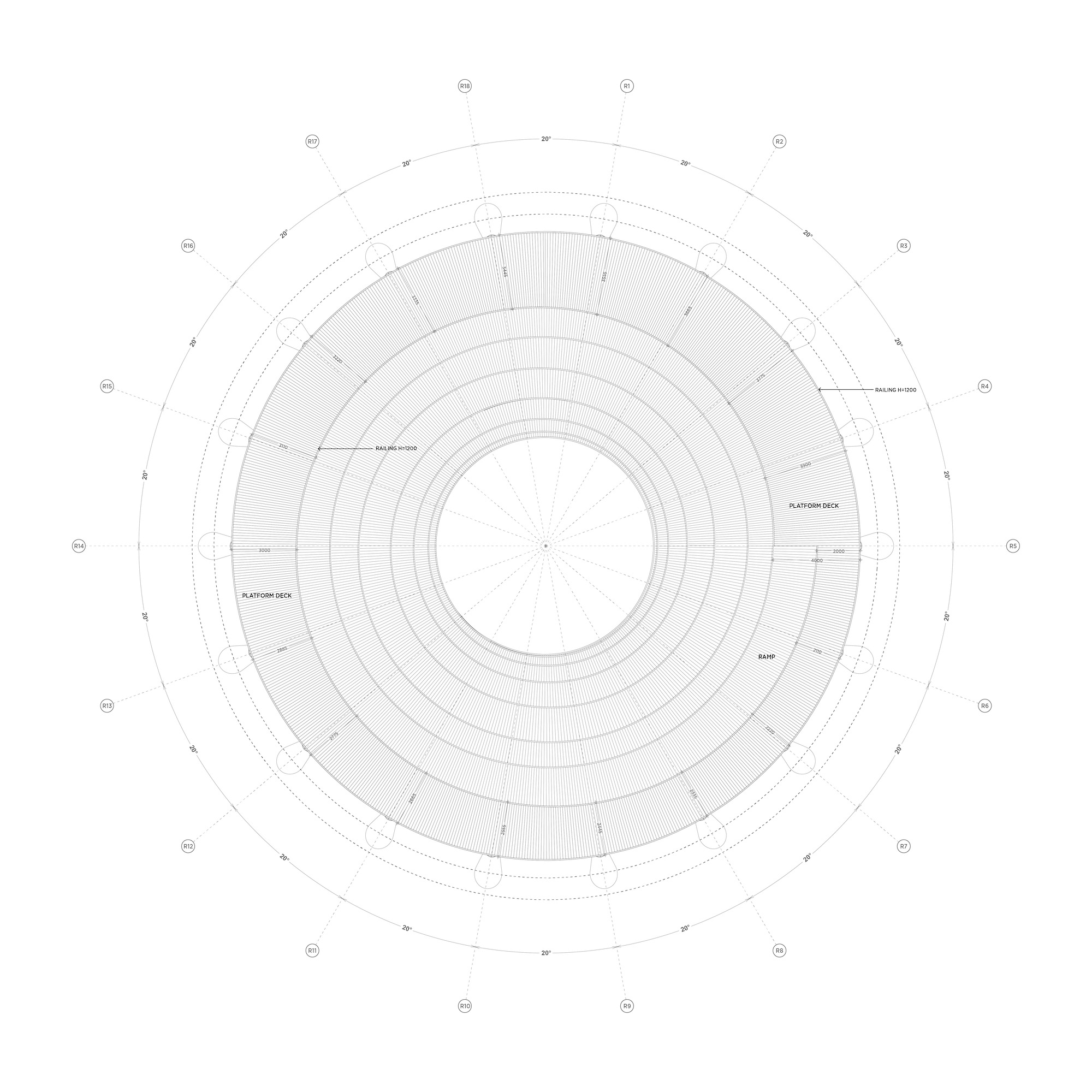